Women at their Toilette, with Degas Dreaming

This hilarious etching portrays Degas dreaming about women.  It was inspired by the raft of Degas’ sketches that Picasso had recently acquired depicting scenes from a brothel.  More specifically, Brigitte Baer describes this particular scene as follows:

“Once again, Picasso is put ‘in the skin of Degas.’  The latter, here, is obviously transforming what he sees in a monotype, and more precisely that of Louvre, Femme s’essuyant les pieds près d’une baignoire (Adhémar-Cachin 158 [illus. below]).   The work of Jean Adhémar and Francoise Cachin, quoted here, was not published at the time but Picasso had the exhibition catalogue of the Fogg Art Museum, curated by E. Parry Janis.  See also the Attente which he had (Adhémar-Cachin no. 94; R.F. 35784).” -Baer, Vol. VII, p. 167, my translation.

Whereas the brushstrokes of Picasso’s paintings of this, his very last period, are the largest–and the depictions are among the sparest–of his entire, long career, the prints in contradistinction involve as fine a line as ever. Picasso seems to have been saying through these prints that even as a nonagenarian he still had a razor-sharp gaze and steady hand—if his paintings tended toward abstraction, it was by choice and not as a product of his old age. His advancing age did of course take its toll in other ways. But although his virility is believed to have waned a decade prior to his death, clearly his mind delightfully remained in the gutter!

John Richardson, Picasso’s principal biographer, describes the themes of Picasso’s late drawings and prints as follows.  Though chiefly writing about the many drawings that Picasso gave to his chauffeur Maurice Bresnu, this passage characterizes the late Picasso prints just as well:

“As a result of an ulcer operation in November 1965, Picasso had given up traveling and become something of a recluse.  Except for his wife Jacqueline, her daughter Catherine, the Bresnus [his chauffeur and the chauffeur’s spouse] and a few professional associates (notably the Crommelynck brothers who worked on his prints), he saw very few people.  To extend the cast of characters in his imagery, Picasso was obliged to invoke figures from his past as well as from his pantheon of favorite painters.  Hence, former mistresses, Barcelona whores, harlequins and circus folk from the Rose period rub shoulders with personages from the work of Raphael, Rembrandt, Goya, Ingres, Degas and van Gogh, and sometimes the artists themselves.  Thanks to these revenants, Picasso managed to merge the past with the present.  The studios at Nôtre Dame de Vie, his villa at Mougins, became a microcosm of his universe-what Gert Schiff called Picasso’s Teatrum mundi….

“Just as Mendelssohn came up with Songs without Words, Picasso came up with stories or plays without texts.  He provides only the illustrations; it is up to us to discern the plot and guess at the hidden links.  Old age is the principal theme of these dazzling drawings, in which the sardonic artists allegorizes ruefully but never self-pityingly the humiliating plight of an eighty-nine year old Lothario with a burnt-out libido.  The resultant images are dream images.  As in a dream, everything—time, place, identity—is in a state of flux.  Especially relevant to this sketchbook is the fact that at the age of fourteen, Picasso took as his first mistress on equestrienne called Rosita del Oro, and that, a lifetime later, she reappears in different guises, first of all in his prints and then, as here, in his drawings….

“Another ghost from the past is Celestina, the procuress immortalized in Fernando de Rojas’s famous fifteenth century novel, which Picasso had illustrated two years earlier.  In this sketchbook he portrays not only Celestina and others of her ilk as wrinkled hags, but the courtesans who work for her and the clients she serves—gap-toothed, singing or laughing cavaliers, out of Franz Hals as well as Rembrandt.  (These terrible teeth suggest that Picasso himself was having dental problems)….  It is typical of the artist’s shamanism to exorcise the aging process by depicting its symptoms.

While discussing his 347 Series with his friend, Roberto Otero, to whom he had shown some of these etchings, Picasso said, “Of course, one never knows what’s going to come out, but as soon as the drawing gets underway, a story or an idea is born. And that’s it. Then the story grows, like theater or life—and the drawing is turned into other drawings, a real novel. It’s great fun, believe me. At least, I enjoy myself no end inventing these stories, and I spend hour after hour while I draw, observing my creatures and thinking about the mad things they’re up to. Basically, it’s my way of writing fiction.” (Roberto Ortero, Forever Picasso: An Intimate Look at his Last Years, New York, 1974, p. 170)

Half a year later, Picasso said the following about the prospective publication of this series to Otero, “You know, Louise Leiris is about to exhibit my latest engravings. And there’s one series that is quite innocent—I mean, quite natural. Well, you can imagine what they are about: Raphael and La Fornarina—his famous model—making love. Well, there’s no need to exaggerate—it’s not all sex, Raphael is painting in many of them, too—but Michelangelo is also there, spying on them from behind the draperies or under the bed. And sometimes the Pope is peeping through the keyhole, or some other important character is lurking about. Anyway, they have to do with certain facts—I would call them historical facts. And do you know what they’ve told Madame Leiris? They’ve told her she will not be able to publish a catalogue, that it can’t be bound. She’ll have to publish loose pages, without sewing them together!” (Roberto Otero, pp. 178-9)

Many of the artists that Picasso depicted later in life are considered self-referential. Kirk Varnedoe, the late, great Chief Curator of Painting and Sculpture at the MOMA, has noted that Picasso’s self-portraits of the 1950s and 1960s were not so much faithful representations of the artist’s likeness as idealizations of an “artistic identity”.  In an essay about these self-portraits, Varnedoe wrote, “The one avatar Picasso embraced most consistently in his final decades was the one with the least disguised self-reference: the figure of the artist. Near the breakup with Gilot, he undertook a series of drawings, often lightly satirical, of the artist in his studio, some of which were published in Verve in late 1953; after that, one or another variant of this theme recurred at intervals, especially among his drawings and prints. The focus was not on his own circumstances. Neither live models nor traditional palettes, which are constant attributes of these late studio scenes, had anything to do with his practice, and the artists in question almost never display his figures in more than allusive fashion; they tend to be stock types, typically bearded, which Picasso never was. Here, as in the case of countless male busts or figures, Picasso-esque combinations of traits can come and go within a series in a way that suggests we may risk a certain arbitrariness in singling out one or another as an authentic self-examination.

“As he dwelled on the image of the older artist Picasso in his last twenty years also sought to fraternize and contend with a pantheon of painters of the past….  Certain of the generic busts and images of artists took on costumes or features that associated them with particular painters from history….  The practice began in greater earnest…after Picasso’s illness and surgery in 1963….” (Kirk Varnedoe, “Picasso’s Self-Portraits,” Picasso and Portraiture, Representation and Transformation, The Museum of Modern Art, New York; Galeries Nationales du Grand Palais, Paris, 1996, pp. 162-3). 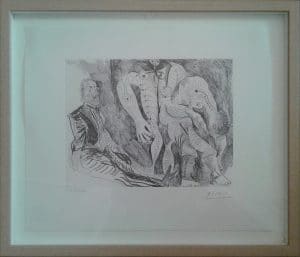 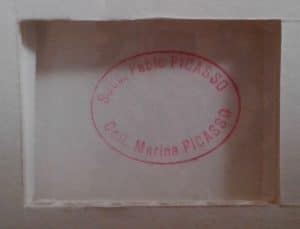