The Sotheby’s auction catalogue described it as “a seminal expression of the artist’s genius.”  I think it’s more like The Emperor’s New Clothes. Though the auction cataloguer did not allude to this, one could place this still life in the context of Picasso’s explorations in his Cezannian proto-cubist phase. But even if so, it is only of academic interest.  It is not a painting that holds its own.  Rather, it assumes significance only by relation to a contemporaneous body of work.  Yet it exceeded the auction estimate of $220-280,000 US to sell for $452,000 (premium included).  I can see no reason why it commanded such a price apart from the fact we Picasso collectors are starved for color.  Otherwise, I just don’t get it.

Especially when you contrast that sale with the following bought-in lot at Christie’s two days later, the 1970 Nu debout et nu assis: 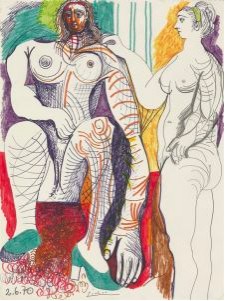 Though slightly smaller and by no means one of the best late Picasso drawings, it is much more interesting, not to mention“prettier”,  than the above watercolor.  Its pre-auction estimate of $400-600,000 seemed high, especially this season, but the buyer of the watercolor above in all likelihood could have had it for the same price.  Go figure….

I suppose the discrepancy could be explained by the absence of “efficiency” in the art market.  Market efficiency in other commercial sectors, notably securities and real estate, has been much debated over the years.  With art, however, there’s little question.