Now that the dust has settled after the fall auction season and the pundits have all weighed in on the current art market, it’s time to look at the recent Picasso sales in greater depth. The season has been marked by a number of notable events, chiefly a Picasso that would have been the highest-priced painting ever sold (La Rêve, 1932), had Steve Wynn not put his elbow through it. It would have been a short-lived triumph anyway, since the sale of a rather homely Pollock shortly thereafter topped it (reportedly) by a million. The prices of these paintings were predictable, in that they just exceeded the previously highest-priced sale, the Lauder Klimt. Clearly, art collecting is a blood sport in which the well-heeled have a competitive advantage. To win at this manhood ritual, all you have to do is break the world’s record for the costliest painting. The good news is that there’s actually twice as much room at the top as may appear at first glance, because both the seller and the buyer get to hold this distinction.

But it is the NY auctions, with their much more plentiful data points, that are the most instructive. One needs first to address the purported weakening of the Picasso market, of which a couple of writers have made hay. Upon closer analysis, this conclusion is apparently based on two high-end Picasso paintings, one at each of the two major auction houses, and several mid-range and low-end paintings, all of which were estimated too high. Sure it’s easy to draw this conclusion in hindsight, but even Sotheby’s has acknowledged it. Referring to these two paintings, Sotheby’s online publication allows, “At Christie’s, the top offering by Picasso sold well below the low end of its estimate (Femmes à la fontaine at $12,896,000; estimate $15-20 million). At Sotheby’s, Le Sauvetage went unsold during the auction, against an estimate of $12-16 million…. The lesson? The relationship between quality and estimate is key to attracting bids and the right balance is essential – even for the artist of the 20th century (Sotheby’s Art Market Review November 2006: Impressionist and Modern Art).” But the Femmes à la fontaine, though historically significant perhaps, is neither particularly pretty nor interesting. And Le Sauvetage, though quite colorful, has an undistinguished and jumbled design, no comparison to a much better example of the series which had fetched $14,792,000 at Sotheby’s NY in 2004.

The painting that I had predicted would set a new world’s record, Portrait of Angel F. de Soto (1903, Z. I, no. 201), was withdrawn prior to the sale amid controversy regarding its rightful ownership (another Nazi confiscation scandal), presumably causing much deflation of suspense, certainly in my mind.

The mid-range and low-end paintings that did poorly were similarly lackluster works. A prime example of these was Femme dans un rocking-chair (1956, Z. XVII, no. 49), which was bought in. A large painting, true, but a hefty price tag (estimate $7-10M) for an uninspiring, homely portrait. 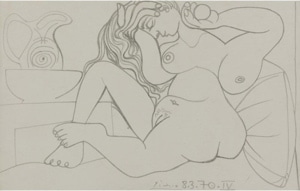 Despite its diminutive size (5×8″), the market correctly perceived its beauty, though its provenance (ex Sean Connery) may have given the bidding an extra kick. Interestingly, Picasso used a similar artifice in two of these drawings, which I believe are not otherwise seen in his work. Note how in Femme nue à sa toilette the subject’s fingers imperceptibly blend with the locks of her hair in (Do the lines represent locks of hair, or fingers? Answer: both.) Similarly, in Portrait d’Olga (illustrated below), drawn an even half-century before, one of the fingers becomes a fold of Olga’s dress. 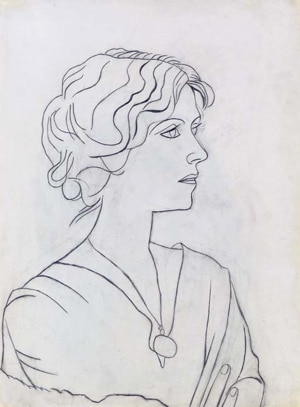 What conclusions can we draw from all of this? To me, the inescapable conclusion is that Picasso buyers are a discerning lot. We’re ready to pay well above the estimates for works we love, but are unwilling to throw money at undeserving art, regardless of the auctioneer’s estimates and marketing.

Turning to the print world, its market remained strong and steady. Unlike the drawings and paintings, virtually every lot sold. The sales’ highlights were arguably the following two lots at Sotheby’s. A unique, unsigned impression of the fifth state of a small, significant but, to my eye, not very appealing aquatint of Dora Maar (Femme a u fauteuil et au chapeau, 1939, Baer 647) sold for $330,000, thanks to the cover design and a three-page catalogue spread. But a set of four very rare unsigned proofs, progressive states of an unpublished lithograph, Femmes d’Alger, d’apres Delacroix (1955, Baer 917) was bought in at the hammer price of $130,000, proving that marketing is not everything. Despite two catalogue pages and a lengthy description, the market correctly perceived that these images were not great art, certainly no comparison to the fabulous and even rarer lithograph of the same title, (Mourlot 266).

As for me, having to make responsible decisions not only as an impassioned collector but also as a dealer, the market was so strong that I amazingly could only buy one lithograph and one painting, and only then because they fell through the cracks.