Bust of a Seated Woman–States I and IX

Artist: Pablo Picasso (1881-1973)
Date:
October 18, 1938
Medium: State I: etching on copper; State IX: etching, aquatint, scraper and engraving
Provenance: Private collection of the artist
Marina Picasso (her stamp verso on the first state)
1990s to Private collection of a French expatriate, New York
2007 to David Tunick, Inc., New York
Dimensions: Prints: State I: 24.9 x 13.7 cm, 9.8 x 5.4″; State IX: 24.9 x 14 cm, 9.8 x 5.5″. Sheets: both 33.8 x 22.3 cm; 13 5/16 x 8 3/4″
References: Bloch 308
Baer 643, States I and IXb (of X)
Cramer 34
Baer, Picasso the Engraver: Selections for the Musée Picasso, Paris, first and tenth states illustrated p.93
Baer, Picasso the Printmaker: Graphics from the Marina Picasso Collection, Dallas Museum of Art, 1983, p.106, illustrated p.114
Robert F. Johnson, Artists’ Books in the Modern Era 1870-2000: The Reva and David Logan Collection of Illustrated Books, p.130
Edition: These are very rare proofs. State I: 15 unsigned impressions (including 6 on this type of paper); State IX: 15 impressions, of which one was signed at the time and three later, before the plate was cut to the subject for the final state and inclusion in André Breton’s Anthologie de L’Humour Noir, which according to Baer was published in an unsigned edition of 17.
Paper: State I: Chine volant, untrimmed; State IX: Montval laid paper; untrimmed (deckled edges on all four sides) with wide margins all around
Impressions: Very fine impressions. State I is in flawless condition. (Please note that the discontinuous line in State I is just a function of my poor photography skills and not the actual etching. I’ve included a supersized image of State I in its frame which looks somewhat better.) State IX is also in perfect condition apart from mild skinning [thinning] of the top of the back of the print from the removal of hinges. This is insignificant and cannot be seen from the front.
Price: Upon request

“The movement of my thought interests me more than the thought itself.” – Picasso

“Finally, another chef-d’oeuvre, though not yet recognized as such, is the small portrait of Dora Maar which would be used later, in 1940, as the frontispiece for the édition de luxe of the Anthologie de l’humour noir by André Breton. Once again, Picasso, who began with a line-etching of his subject, retouched his aquatint, layer by layer, taking it through eight states. In the 9th and 10th states, Lacourière traced a line in drypoint to show where the copperplate should be cut and then removed the written part of the plate.

“Picasso took a great amount of trouble with that small plate. He used tarlatan to lay down his sugar-lift aquatint on the bodice of the dress, worked and worked again on the aquatint of the background, scraped, and reworked the portrait with the burin [engraving tool], then went back again to the aquatint of the background, deciding to make the right side of it darker than the left side. He then had the idea of lightly coloring the triangular neck with aquatint and finally used his burin again to perfect his work. Despite its small size, the print is a highly successful and ‘monumental’ portrait.

“This can be translated as, ‘shift the starch of the color of the half-opened door to the left side of the room and toss the ash of the ceiling [lamp] into the mouth of the drawing which would like to tear the illusion of the shoe of shadow supporting the defiant kick of the almond green.’  Here there is a kind of pun, difficult to translate: ‘pied de nez’ in literal translation is ‘foot of nose,’ which means ‘thumbing his nose.’  ‘Pied’, i.e. foot, is related to ‘sabot’, i.e. wooden shoe. This typically Picassoesque literature was, as mentioned above, cut away when the plate was pulled for André Breton’s book.” (Brigitte Baer, Picasso the Printmaker: Graphics from the Marina Picasso Collection, Dallas Museum of Art, 1983, p.106)

Since her writing, this work has become rather celebrated. She’s actually the cover girl of the Sotheby’s catalogue for its November 1, 2007, print sale. Note the pre-auction estimate at this sale of $350,000-500,000 (plus buyer’s premium) for five unsigned states (I, II, V, VIII, and IX). In my opinion, the intermediate states are of but academic interest and add nothing aesthetically, as they simply appear unfinished. The works at hand also strikes me as much more beautiful than the rare Dora print that Sotheby’s featured on its cover last fall and sold for $324,000 (Baer 647, illustrated below). Frankly, I don’t even like that depiction of Dora’s head, just her body, and the armchair is certainly nice: 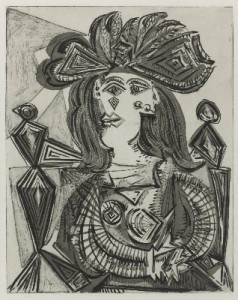 “Nearly every photograph of Pablo Picasso reveals a penetrating gaze—whether fixated on the camera, another person or a painting—his wide eyes appear to seek out each detail, seemingly absorbing every angle at once.  His skill in relaying a multiplicity of perspectives to the picture plane yielded some of the most important images in the history of art and the late 1930s proved an era of particular political and creative significance for the artist. 1937 saw the completion of Guernica and Sueño y Mentira di Franco (Dreams and Lies of Franco), the monumental mural and a pair of etchings, respectively, both of which expressed Picasso’s Republican sympathies and his outrage over the bloodshed of the Spanish Civil War.  Appearing in both projects is an indelibly haunting image of a bereaving woman, weeping as she screams angrily skyward; it was this figure that most consumed Picasso and culminated in his pivotal etching La Femme Qui Pleure.

“That same year following the end of his marriage to Olga and the birth of his daughter Maya by Marie-Thérèse, Picasso found himself energized by his seminal artistic achievements, eager to submerge himself again in the avant-garde.  Picasso’s lover and muse during this period was Henriette Theodora Markovitch, known as Dora Maar.  A photographer closely allied with fellow surrealists such as Breton and Man Ray, her aesthetic played with light, instinct and illusion, often in an otherworldly manner.  Born in France yet fluent in Spanish, the independent and formidable Dora Maar was to become the only woman in Picasso’s life who had made a distinct name for herself apart from her liaison with him and naturally this was to be both the inspiration and the undoing of their seven year relationship, They became important to each other as lovers but also as subject matter; only Dora was allowed to photograph the evolution of Guernica and her images stand as the only documentation of this masterpiece in progress. Likewise, Picasso’s iconic portrayals of Dora are the most complicated and unsettling of his portraits, a visual record of his struggle to dominate the first and only woman in his life who would not fall prey to his controlling ways. The strong etched lines and complex composition of the present works serve to epitomize how personal challenges produced artistic triumphs during this critical decade in Picasso’s oeuvre.” (Sotheby’s Prints, New York, November 1, 2007, p.118) 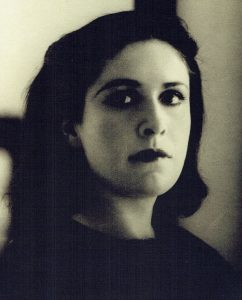