This is one of the most charming prints of Picasso’s last years. There’s Picasso in the corner, at age 88, having little else to entice a young woman other than a small flower. But it is no ordinary flower—it’s nothing less than a four-leafed clover, representing hope and luck, tools that could come in handy as one approaches ninety.

But this etching is actually an allegorical double self-portrait.  Next to the toy horse is a harlequin, with his ruffled sleeves and the diamond-shaped pants design, typical of another stand-in for Picasso. This two-faced clown is overwhelmed by the beauties surrounding him, as if he doesn’t know which way to turn—his masked face looks towards one of them while his aged visage gazes admiringly at the other.  Meanwhile the worldly older woman with heavy eye make-up stands unselfconsciously beside the doe-eyed younger beauty.

It is noteworthy that this print is the largest of the 156 Series, a distinction that it shares with three other works of identical format.

Referring to a related sketchbook of the same year, John Richardson observes: “Old age is the principal theme of these dazzling drawings, in which the sardonic artist allegorizes ruefully but never self-pityingly the humiliating plight of an eighty-nine year old Lothario with a burnt-out libido. The resultant images are dream images. As in a dream, everything—time, place, identity—is in a state of flux. Especially relevant to this sketchbook is the fact that at the age of fifteen, Picasso took as his first mistress an equestrienne called Rosita del Oro, and that, a lifetime later, she reappears in different guises, first of all in his prints and then, as here, in his drawings.” (J. Richardson, The Bresnu Collection, introduction to Christie’s sale catalogue, New York, 19 november 1998) 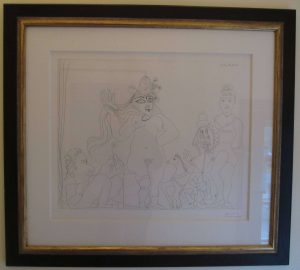