It’s springtime in New York, and Picassos, like bulbs, are flowering everywhere.  It was truly a pleasure to soak them in at the museums, the auctions, and also at Marlborough Gallery, which had staged an impressive print exhibit, including the masterpieces from the Nelson Blitz and Catherine Woodard collection.   It was also a relief that Giacometti was bloodlessly deposed, after his brief and inexplicable reign.

Curiously, I found myself defending the Met’s exhibit, primarily from charges that the show was long on early works but short on the rest.  The NY Times was in the vanguard of this innuendo, but more than one of my friends followed its lead.  It seemed to me to say more about human nature—you know, attacking whomever is at the top—than the quality of the exhibit.  So what if the Met’s collection is spotty?  Museums take what they can get.  No museum has the billions it would take to amass a more thorough Picasso collection today.  As for me, basking in the glow of just one, any one, of the many Picasso masterpieces at the exhibit would have been enough to make my week. 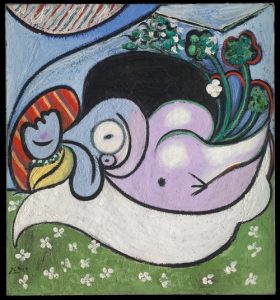 Marie-Therese, for one, certainly didn’t seem to care, lost in the rapture of repose in both canvases.  And I didn’t want to depress the bidding by showing my hand before the auction (as if!), but now I can come clean.  Sure, the Brody painting is more complex, with Marie-Therese’s sculpture and the artist’s silhouette in the background, and the houseplant is more beautifully realized than the flora outside, but, at the Met, her flowing curves stole my heart.