“I do hope you’re not driving”

We had been texting back and forth while crossing the Bay Bridge, but the liberal use of emoticons betrayed my young ghostwriter.

“Can’t wait to meecha mystery scribe….  Tell your chauffeur that I’m staring at a beauuuuutiful Picasso: nude with crossed legs”

Sofie, riding shotgun, glanced at the attachment and pronounced that it was indeed beautiful.  Unwilling to take my eyes off the road to examine my iPhone, I discounted all of these accounts.  Not that I doubted any of their eyes—all three sets are quite keen—but I figured they were all admiring just another nice Picasso.  After all, there are so many.  Little did I know what was awaiting us as we entered the gallery.

And there she was, in the place of honor, the center of the main viewing room, ready to be ogled by all.  Transfixed for the longest time, I interrupted my reverie just long enough to introduce ourselves to the debonaire host, Dr. Steven Platzman, founder of Addison Fine Arts.  Steven, who had graciously opened his gallery for a preview of Sotheby’s upcoming NY sales, was in the midst of knowledgeably discussing the traveling treasures with the many visiting patrons of the arts.

As we wound our way through the several rooms, stopping only to indulge in the floating trays of gourmet canapés, my gratitude grew immeasurably, toward not only Steven for being so welcoming to my friends and family, but also to the good people of Sotheby’s for having arranged this sneak preview for the benefit of us Left Coasters.  There were many fine works on display, but this lonely woman towered above them all.

Days later, with Nu aux Jaimbes Croisées (Nude with Crossed Legs, 1903) still reverberating in my mind, it strikes me that this is one of those instances in which the artwork must be seen in the flesh to be fully appreciated.  The medium makes this especially true.  Picasso didn’t often use pastels, and a significant and largish (57 x 43 cm) Blue Period pastel such as this is exceedingly rare.  But when he did, the results could be striking.  The textured richness of pastel is rivaled only by oil paint, and in cases such as this, the pastel seems arguably richer, deeper.  (Wondering whether this observation is widely shared, Googling led me to an explanation on Wikipedia: “Pastel paintings, being made with a medium that has the highest pigment concentration of all, reflect light without darkening refraction, allowing for very saturated colors.”)

Standing in the aura of this artwork was a transformative experience, but I could hardly expect its power to come across in a photo.   So hopefully you’ll have a chance to see it in NY.  I will leave it to Sotheby’s capable hands to flesh out its description and discussion and will instead venture a few peripheral observations in establishing this woman’s proper place in the Blue Period pantheon.

Picasso’s Blue Period has been greedily collected for over a century, so it is also a rare event for one of the masterpieces of this seminal period to appear on the market.    When using the $5M mark as the threshold for an important Blue Period artwork, there have been but four sales at auction in this millennium. Given such small numbers, each of these paintings should be evaluated individually in order to make any meaningful comparisons, but since you’re curious, I’ll just mention that their average price was over $34M.  Admittedly, these were all oils, but important, full-sized Blue Period works on paper are not to be discounted.  (Note that the record for Picasso works on paper was a Rose Period gouache, which long ago brought over $38M.)  And I would hold this pastel against all but two of those paintings, each of which topped $50M.  To fully account for interim appreciation, if you would prefer to use $2M as the floor, you could add one painting to the list, from way back in 2007.  (I should acknowledge that Artnet, the database I consulted, is often incomplete, but it generally gives a pretty good idea.)  So take a look at the comps—I think you will find the current estimate quite low.

The value of this artwork is in part attributable to its “freshness” to market.   For better of for worse, the fine art market, or at least its upper echelons, places a large premium on a major artwork if it has not surfaced for a long time, if ever.  Beyond simply fresh, this previously unheralded masterpiece has lived the past century in such obscurity that it would not be much of a stretch to call it an unknown masterpiece.  Not that this pastel was entirely unknown–it was certainly included in Zervos and therefore in Wofsy’s Picasso Project, but those small, black-and-white illustrations could hardly have done justice to this piece, especially in view of how integral color is to its composition (more on that later).   To have seen it only in black-and-white is almost tantamount to not having seen it at all.  Daix also included a small black-and-white photograph but did not elaborate upon it in his text.  There was also a book published in 1946 which would not have been illustrated in color, and a publication in Spanish in 2000 which I have not examined.  It evidently took the 2001 publication, Picasso Erotique, to get a color photo into the public eye, but again without discussion.  It is most unusual that a major Blue Period work escaped the limelight for over a hundred years.

In today’s “anything goes” art world, the stylistic innovations of this pastel are hardly enough to raise anyone’s eyebrows, but at the time, Nude with Crossed Legs must have been considered a radical departure.  A century ago, it could only have been considered unfinished, that is, by anyone other than its creator.  Picasso’s unerring eye always knew when to stop, even if his artwork may have looked half-finished in any conventional sense.  But even in Picasso’s vast oeuvre, this pastel features a couple of stylistic firsts.

By now you have probably noted the various positions of the subject’s arms and legs.  The final positions of most of the extremities is clear—not so with the right arm, of which its crossed iteration has hardly more weight than its vertical one.  And what’s with that half-colored leg?

Pentimento (pleural: pentimenti), as it is traditionally defined, is “the reappearance in a painting of an underlying image that had been painted over, usually when the later painting becomes transparent with age.”  (Barring aging, oil paintings in which the paint completely covers the canvas do not lend themselves to pentimenti, since their pigments are opaque.)  This pastel marks the first example of Picasso’s deliberate decision to leave his pentimenti intact, thereby divulging the backstory of his process for all to see.  Rather than erase them, Picasso must have found them interesting to behold, and presumably thought we would, too.

At least this is the first major artwork in Picasso’s oeuvre which features pentimenti.  I have now completed an exhaustive search of all of the gouaches, watercolors, and pastels that preceded this work and found no other examples.  (I did not however examine every black-and-white drawing up to this date.  Not only are there limits to my obsessiveness, but also I don’t think of pentimenti as quite as radical an innovation in drawing, since sketching often involves correcting or improving along the way.  Traditionally, artists drew their first contours very lightly and erased any remaining traces before considering their drawings finished.  But Picasso subverted the canons of art wholesale, and this was no exception.  His future work would feature some other delightful instances of pentimenti, although they didn’t occur very often, no doubt because of the sureness of the master’s hand.  But three decades, several periods, and countless styles later, the pentimenti themselves briefly became the principal style of his artwork.  Two sensational 1932 drawings come to mind to illustrate the pinnacle of Picasso’s pentimenti.  I’ve previously illustrated  “A Guide to Collecting Picasso’s Drawings” with one of them, Nu Couché.  The other is shown below, Nu Endormi: 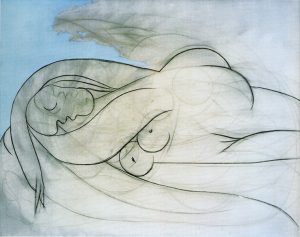 As for the blue leg of Nu aux Jaimbes Croisées, this pastel is the only artwork I can think of which employs the ingenious artifice of gaudily coloring a part of an otherwise flesh-colored subject by borrowing a bright color from the background.  It is awe-inspiring to note that the greatest visual punster of all time had already amassed so many tricks by the ripe old age of 22.

Not that I am arguing for the primacy of innovation, but innovation is clearly one of the hallmarks of Modern Art.  And Picasso was indeed the Thomas Edison of innovation.  Yet it took the good Mr. Edison a thousand unsuccessful tries before arriving at a reliable filament for his bulb, whereas most of Picasso’s “experiments” were unmitigated successes.  Perhaps other artists would have come up with many of Picasso’s inventions in the fullness of time, just as someone would eventually have invented the lightbulb.  But it’s not just the vast number of Picasso’s inventions that staggers the mind, it’s just as much their execution, the amazing and beautiful ways in which he pulled them off…. 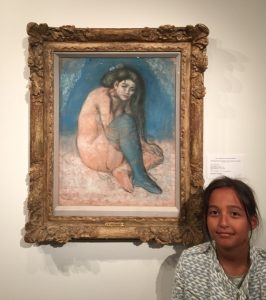