“The more I see, the less I know.” – Michael Franti

Weeks have passed, but I still can’t seem to get my mind around Giacometti’s 100 million dollar man.  A 104.3, to be exact.  (As you may have guessed, I didn’t have the same mental block when it came to Picasso’s 100 million dollar boy.)  I thought I liked Alberto Giacometti as much as the next guy, but I guess I was wrong.  He made some wonderful sculptures, but, at 100 million dollars, not to mention his other recent stratospheric prices, I am forced to conclude that he is an amazingly overrated artist.  And this sculpture was not even close to one of his best, as far as I’m concerned.  It’s also not unique—the edition size is 10—which fact I bring up only because scarcity is an inescapable determinant of value.  (Though this is not a bad time to remind those of you who still consider the term “print” pejorative that bronzes are often also not unique and are no closer than prints to the artist’s hand.) 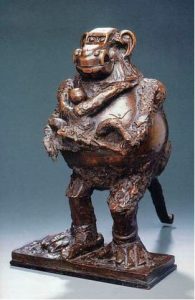 To my eye, it ought to be worth 100 times Giacometti’s Walking Man. That would make it worth what—10 billion dollars?  Sounds about right to me.  And to think that these mother and child baboons fetched under 7 million US in 2002.  Proving that, as an economist client of mine puts it, the art market is in a state of disequilibrium.  I’ll say!

As for me, I think I’ll stick to collecting Picasso, not only for the beauty of his works, but also because he is still quite undervalued.  I also think I’ll make my own Giacometti…topiary, that is, after one of  his works that I vastly prefer to his Walking Man: 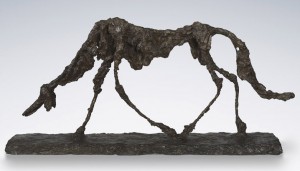 I intend to use a weeping Blue Atlas Cedar or two to sculpt my Giaco pup.  What do you think?  Here’s a specimen that looks like it’s already halfway there: 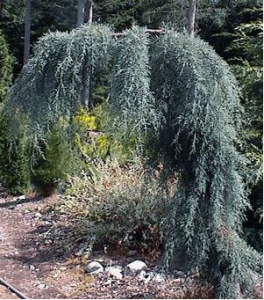