There are those collectors who love the art no matter how small, and there are those who won’t look at a piece if it doesn’t reach a certain size.  This “column” is for the former.  Having addressed the merits of collecting small art works before, I would now like to further the discussion by drawing your attention to two highlights of this spring auction season.  They demonstrate both the highs and lows of collecting miniature Picassos.  Well, just the current high, not the real highs—some of those were most recently sold a couple of years ago (see Does Size Matter?). 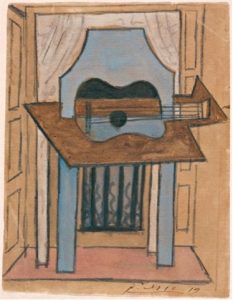 This is one of many still lifes that Picasso created around this time, most of them smallish works on paper generally depicting a guitar on a table in front of a window, a view out the window of his Parisian apartment.  The most famous of these works on paper is in the Berggruen Museum.  We, too, have a beautiful one (Le Guéridon, 1920), in which the window is shown at its most abstract.  OK, the one at hand does not compare to either Berggruen’s or ours or to a number of other absolutely great ones in the Musée Picasso, either in terms of beauty, layers of meaning, humor, or size (this one is 12.7 cm or 5” in height).  But it is nonetheless a wonderful and amusing work in its own right.  At first it may appear deceptively simple.  But note how the blue sky cleverly becomes the table’s front legs and also the bottom half of the guitar, how the bottom of the curtains doubles as the back legs of the table, and how the head of the guitar is really an extension of the tabletop.  Interestingly, a cardboard and paper sculpture that was included in the monumental “Cubist Picasso” show at the Musée Picasso in 2007 is clearly related to the work at hand, though even smaller:

It’s apparently impossible to know whether the chicken came first or the egg, but each is a tour-de-force in different ways.  The humor of the legs of sky and curtain in the gouache does not translate into the three-dimensional work.  But the negative space of the body of the guitar is a pretty good joke in the sculpture, which is lost in the painting.  And, as if the void between the blue margins of the guitar were not enough, the guitar’s soundhole is an actual hole in the tabletop itself!  So each medium has its own advantages in best conveying the jester’s wit…. 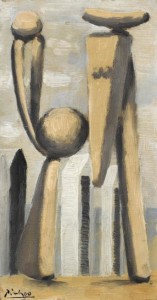 Ten years later, we find Picasso wading among his surrealist bathers in the South of France.  Although most of them are pencil drawings, almost all of which are in the collection of the Musée Picasso, there are a few large blockbuster museum paintings, notably the man-eater at the MOMA, Baigneuse assise au bord de la mer from the following year: 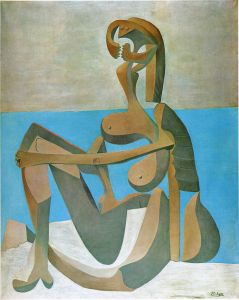 Before I sign off, here’s something strictly for your amusement—hopefully not your derision—a collage I made to console myself when I didn’t manage to bring the above gouache home: 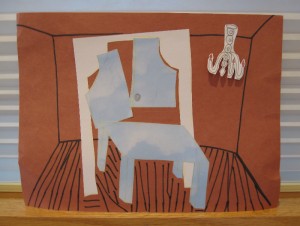