1932 was a great year for Picasso.  He had just turned 50, which must have made him want to take stock.  He was also commemorating that birthday by personally curating his first museum show, which took place that year in Zurich and which has now been largely reassembled in an exhibit at the same museum, Kunsthaus Zürich, ending January 30–as far as I know the only artist’s show ever to be revived (a nice catalogue accompanies the show entitled Picasso by Picasso: His First Museum Exhibition 1932).  Picasso had long since emerged as the preeminent artist of his time, but this year, as if to underscore his supremacy, he had revved up into high gear and was cranking out one masterpiece after another at a breakneck speed.

The market certainly loves this period, and so do you, I dare say, and your partner for that matter.  So it was wonderful to be able to see two of its exemplars at the same time in NY last spring, not counting the one on the sidewalk.  Of the real ones, the permanent fixture was at the Met’s Picasso show (from its own collection).  The other, Nude, Green Leaves and Bust, came and went at Christie’s, reclaiming the auction record for Picasso (see “Sidewalks of New York“).  So just when you were starting to hanker for another great Marie-Thérèse, a breathtakingly beautiful one has just been unveiled online, heralding its sale next month at Sotheby’s London, La Lecture: 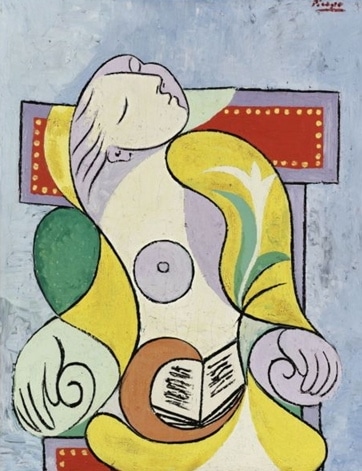 Significantly, Picasso had chosen this painting for his hand-picked Zürich exhibition.  It may not be quite in the same league as the much larger and more famous Le Rêve, but I think it holds its own compared to the Met’s to Green Leaves.  Who could choose between the beauty and the dazzling complexity of Green Leaves and the beauty and the dazzling complexity (and deceptive simplicity) of La Lecture?  The nude in Green Leaves is wonderful, as are the philodendron, the background drapery, and the half-hidden visage of Picasso looking on, and the bust is a nice touch.  However, the deceptive simplicity, brilliant formalism and gaiety of the current offering are stop-in-your-tracks exceptional.  La Lecture shows Marie-Thérèse asleep (again), a sensuous melding of coplanar curves and organic forms in sharp opposition to the rectilinear, nail-studded armchair.  Her lines and flat shapes would appear to almost stand on their own and assert their independence from the composition, as if they only by chance contributed to it, if they were not so tightly bound together and so interconnected in the service of the overall design.  Such great ingenuity of line could only have been created by Picasso–you don’t need to see it in a book, nor do you need the good name of Sotheby’s behind it, to know this is Picasso.

One wonders why the modest estimate of 12-18M GBP (about 20-30M USD)?  Is it its relatively small size?  At 65.5 cm, it’s a full-sized painting, but barely so. It’s a third smaller than the Met’s, half the size of Le Rêve and less than half the size of Green Leaves.  But it’s almost as large as The Portrait of Angel de Soto, which at $52M was the great giveaway last year.  Size should be less of a factor in determining the value of an artwork than the market would often have it, don’t you think?  Maybe it’s like orchids–sometimes they’re the small ones that steal your heart.  By all rights, La Lecture should bring at least double its high estimate, if not triple.  You can’t ask much more of your Picasso than this.  Unless there are serious condition problems, that is.  Although I haven’t yet seen it in the flesh and am awaiting the condition report, the photo looks like there is vertical craquelure throughout the white and blue, which could depress its value in the eyes of some collectors.  Though even one of my little kids remarked upon it, La Lecture looks so stunning that hopefully a wee bit of dematitis could be easily overlooked.  (Addendum: Sotheby’s just published the following condition report: “There is some fine and stable hairline craquelure, and some paint shrinkage in areas of thick impasto…, inherent to the artist’s working process.”)

The underbidder won’t have to lick his wounds for longer than half an hour before getting a shot at a token consolation prize, a small but sensitive 1923 portrait of Olga in brown and pink: 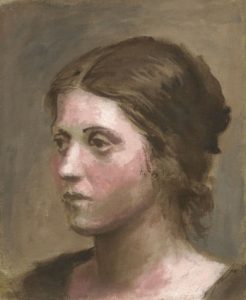 It may seem like a simple exercise in naturalism at first, if a little fuzzy at the contours, but the broad patches of alternating pink and brown skin subvert the realism of this handsome portrait.