The Picasso Museum on wheels, currently at the de Young in San Francisco, is such a wonderful show (see “Picasso by the Bay” below) that it’s almost easier to discuss what’s not there than what is.  Well not quite, though each great Picasso, in addition to being loved and understood on its own merits, must be seen in the context of his entire oeuvre for full appreciation, given the added dimensions that the context inevitably provides.  I won’t again trot out the by now overused Picasso-ism about the movement of his thought interesting him (in his later years) more than the thought itself–there, I said it anyway. But nowhere is that movement better preserved, with the exception of the successive photos of Guernica and The Charnel House, courtesy of Dora Maar, than through the window of the progressive states of so many of his prints.  And every now and then, a certain Picasso, in this case a drypoint from 1933, veritably screams out for its context.  The case in point looks more or less like this: 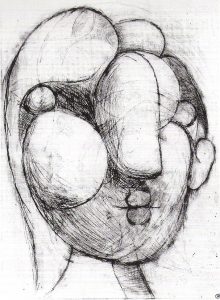 interesting enough perhaps when seen in isolation, but nothing compared to when it’s in the company of its friends.  You see, this print is the XIVth  state of twenty!  (Or XIIIth.  I have to go take another peek at it, now that I’ve looked up all the states in the catalogue raisonné.)  The subject of this print went through so many phases, not the least of which is that she started out as a profile facing (our) left, then assumed a quarter face pose, then straight on, and finally ended up a quarter face turned the other way.  You’ll see a few of them (below), but for the whole set, you’d have to consult Baer Geiser, Vol. II, No. 288.  What’s so great about the progression is that, except for one major erasure between states 7 and 8, Picasso doesn’t cover his tracks, but leaves  a trail just clear enough to show us where he’s been. The technical term is pentimenti, but never mind.  I won’t even mention “palimpsests”.  Except to say that this may well be the most fascinating of all of his many palimpsests.  Oh, no, I did it again.  Anyway, it’s tragic that he didn’t print more, many more, than the unique impression of each of the states IV through VII, because they are all masterpieces.  He pretty much started over with state VIII for some unknown reason, and, from there, fooled around for a while without dropping any clues as to where he was headed or whether he could possibly save this progression from disaster, or so it might at first seem, all the way up through the penultimate state–well, there were already some hints of  masterpieces in the XVIIIth  and XIXth states, but, suddenly and almost without warning, voila! the XXth and final woman (ref. Bloch 250) emerges, as if from a cake, and becomes one of the most wonderful and intriguing of all of Picasso’s graphic works.  You really need Baer Geiser for a full appreciation of the continuum, but here are photos of some of the states, just to get you started:

From humble beginnings, State I: 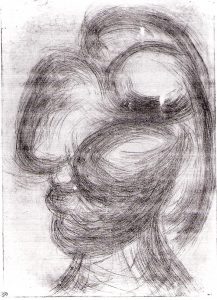 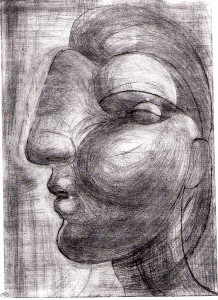 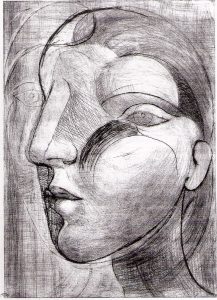 Then he takes it all away by State VIII, and starts rebuilding slowly with State IX: 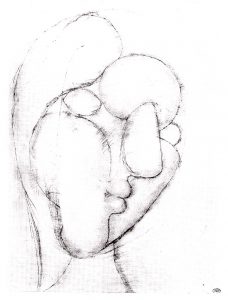 and brings it all back by the XXth and final state (see also Tête de Femme): 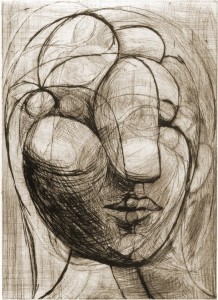 By the way, if you bought the catalogue, you won’t find this print illustrated within it.  You might also have noticed that there are many more illustrations there than exhibited artworks.  Although works in other mediums have remained constant (or nearly so) at all the exhibit venues, the print selections have varied greatly.  So it is with this state XIV or whichever, temporarily orphaned, but soon to rejoin its dark family berth once again in some hallowed print file in the Musée Picasso’s basement.  Pity.   Anyway, be sure to spot  this intermediate state if you make it there–it’s sojourn in San Francisco may well be its last sighting ever!