On a jet-lagged early morning, I’d like to spill my thoughts onto this screen so you can hurry and see these spectacular Picassos, in case you happen to be in the ‘hood.  This time I sojourned in NY with one of our kids, and I have to say that the apostate Sofie chose as the best-in-show not a Picasso at all, but rather a Warhol painting.  Well, Superman is an admittedly spectacular Warhol, but since I’m writing this and not Sofie, it’s not going to be illustrated here.

The 1000-pound gorilla in the room was the unavoidable Les Femmes d’Alger, Version O (above).  This Christie’s blockbuster, which is predicted (and I believe also guaranteed) to break the world auction record to the tune of something like $145M USD, was one of 15 paintings and a variety of drawings and prints that Picasso created à la Delacroix, and also as an homage to Matisse, who had died five weeks before Picasso began the series.  Picasso’s friend and really his only rival had famously depicted the harem and other “orientalist” scenes, and, as usual, Picasso wanted to one-up him.  A tribute, yes, but also, shall we say, an improvement.

Past that wonderful painting, the two pieces I was tempted to sneak away with are the print at Christie’s, La Femme qui Pleur, I (the 7th and final state, est. $4-6M): 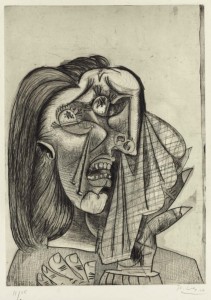 Last time another impression was auctioned, it broke the $5M mark and thereby set a world’s record for original prints.  (And I am pleased to remind you that it was unsigned.) 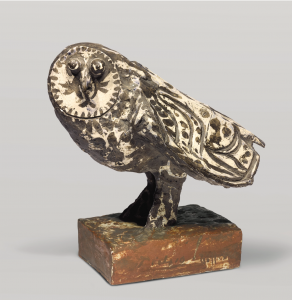