Happy holidays to all!  I’m talkin’ ta you, yeah you—all you wonderful folks who have made peddling Picassos personally possible and, more importantly, who have enriched our lives and made them so much more interesting because you’re in them.  So…we’ve survived another year, and I don’t mean in business—I mean the world.  And no doubt you’re as apprehensive about the next year as we are.  So to all of you, Casey and I and the kids wish you peace and health and all the best for the new year! 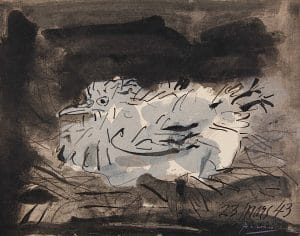 It occurs to me that you just might be wondering who this collective “you” might be, or that at some point you might have wondered who the other collectors are “out there”.  Certain names keep coming up, like Russian oligarchs, Chinese heavies whose names somehow slip through my ears without a trace, and of course the “Steves”:  Stevie Cohen, Steve Wynn, Steve Martin.  I probably left out some other Steves.  And quasi-Steves and pseudo-Steves abound.  Here’s a quasi-Steve I hadn’t known about but who just surfaced in the NY Times: 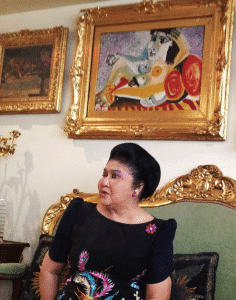 For the most part, these household names are not in our Rolodex.  So, then, who are you?  “We’re just simple folk,” I hear you saying.  Simple folk indeed, who also happen to be, and do, many things, not the least of which is collecting Picassos.  Some others are saying, “Simple?  We’re not simple!  We’re sophisticates—anything but simple!”  Fine.

As a collector (and as I have often said before, I think more like an art collector than an art dealer), I have been idly curious who else collects art and what motivates them to do so.  In case you, too, ever wonder whose company you keep, although we of course keep our personal Rolodex secure and private, I could offer the following characterizations of our collectors, without naming names.  The average profile of our collectors is a self-employed businessman or -woman, often the founder and/or CEO of their corporation.  But there is a wide range, from start-up gazillionaires and the second and third generations of a famous family of Picasso collectors, all the way to grad students.  (No collegiates yet, though one just asked for help for her paper on the finger-painting lithograph, Paloma et Claude.)  Also doctors, lawyers, bankers (yes there are nice bankers–in fact all the ones we’ve met are truly wonderful people).  Gotta mention the surgical prosthesis manufacturer, the  commodities trader, and the testy but lovable ex-Navy Seal.  Yes, and a Formula 1 auto racer, an auto accessorizer, and owners of auto racing tracks (is there something about Picasso and cars?), and, naturally, a bevy of assorted artists and fellow art dealers.  The list goes on….  All of you are delightful people who are a privilege to know and whom we’re thrilled to have befriended.  (As our friend Babs, the retired lawyer, liked to say, if her clients weren’t amusing, she found others.)

Greetings go out also to all you fine people whom we met in our exhibit at the San Francisco Fall Art & Antiques Show.  Its charity gala was particularly stupendous—here’s a peek at some of the gliteratti who attended.  Locals will recognize the woman next to me, Dede Wilsey, whose name is synonymous in the Bay Area with “patron of the arts”).  In keeping with the fair’s theme of Animalia, or animals in art, note the “feather people”, contenders in my book for the best costumes of the evening:

And for those of you who couldn’t make the fair with lame excuses like you’re from China (there are direct flights, you know!) but are nonetheless curious how our exhibit looked, here are a couple of more complete views:

Have a great year!  And keep in touch….