Artist: Pablo Picasso (1881-1973)
Date
: 1950
Medium: Lithograph made with fingerpainting with ink on lithographic transfer paper
Dimensions: Print: 330 x 525mm, 12 5/8x 20 11/16″; sheet 498 x 651 mm, 19 5/8 x 25 5/8″
References: Bloch 664; Mourlot 186; Kramer 60
Edition:  Hatje Cantz lists 5 artist’s uncut proofs with wide margins. There is also an unrecorded but apparently very small number of uncut impressions with the date and location annotated at bottom in the transfer paper.  I believe it is also a vanishingly small number, probably about the same as the 5 unannotated, uncut impressions such as this. These are apart from the edition of 2000 which were cut along the margins for use as book covers.  These proofs and the edition were printed by Mourlot before the stone was polished out.
Paper: Arches wove; untrimmed
Impression: Very fine
Condition: Excellent, framed
Price: Upon request

Picasso’s innovativeness in technique as well as style is unparalleled.  True to form, the medium of lithography was no exception, in which he experimented with materials and methods never before used, such as fingerpainting in the case of this lithograph.  Picasso had said that as a child he could already paint like Delacroix, but it took him all his life to learn how to paint like a child.  This tender lithograph of his children was uniquely accomplished by fingerpainting on lithographic transfer paper, thus amusingly adapting a childlike technique to the depiction of children.   But, like a poor thief, Picasso interestingly left his inky fingerprints all over the image.

Despite the fact that this is one of Picasso’s most charming, accomplished, and sought-after prints, and a large print at that, it is quite a bargain, due to the comparatively large edition size. This rare, uncut impression with Picasso’s inscription, as well as its flawless condition–unusual for the regular edition of this print, bumps the price up a bit.

John Richardson, one of Picasso’s principle biographers, arguably his premier biographer, has written about this period as follows:
“Once again a change of circumstances resulted in a change of style. The end of the war, the beginning of an idyllic new relationship (with Françoise Gilot) and the resumption of Mediterranean visits after an interval of five years are all reflected in these light-hearted pastorales in which centaurs, satyrs and nymphs frolic and make love. Gone is the agonized look of Dora Maar; instead Françoise serenely gazes out at us from a series or radiant portraits often painted in a manner that recalls Matisse. From 1945 onward Picasso applied himself to lithography, completely revolutionizing the medium. He also injected new life into the art of ceramics, installing himself at Vallauris in order to do so. There, in 1948, Picasso bought a derelict scent factory so as to have sufficient studio space, and settled himself, Françoise and their two young children, Claude (born in 1947) and Paloma (born in 1949), in a villa nearby. The decade ends with a spate of paintings and lithographs, mainly of family life, which testify to the artist’s happiness.” (John Richardson, Picasso: An American Tribute, New York, 1962). 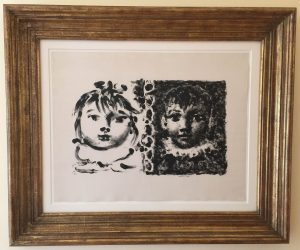