I suppose it’s time to weigh in on the newly reopened Picasso Museum Paris.  Not that it needs it—it truly speaks for itself.  But opinions vary, and it should come as no surprise that the museum has its detractors, despite the fact that it has more Picassos and has more of them on view than any other place on earth.  Weirdly, that doesn’t seem to stop some people.  For example, see the scathing review by Holland Cotter in the NY Times of Oct. 27, 2014 (http://www.nytimes.com/2014/10/28/arts/design/the-picasso-museum-reopens-in-paris.html?_r=0).  Tell you what—I’ll spare you and just paste one of his choicest rants:

“All together, you can learn a tremendous amount about him in the Picasso Museum show, not least that he could be a truly terrible artist. Maybe the biggest revelation, though, comes on the top floor, when you catch your first glimpse of a Cézanne landscape Picasso once owned, and instantly sense what’s been missing from the two floors below: focus, concentration, a point of repose, warmth like a light in a tunnel, a fire in a hearth, a vigil lamp in a church.  The comparison of Cézanne to Picasso we see here is of painter to cartoonist, of steady walker to competition dancer. It’s hard even to imagine Picasso painting landscapes — though he did; there’s one nearby — because, judging by this jumpy show, he doesn’t know how to be quiet, to sit there, stop spewing, do nothing, look long.”

You’d think the Times, of all rags,  wouldn’t have a hard time finding a writer who understands his subject, but never mind.  At the time, I posted a comment on NYTimes.com in response, sight unseen.  Now that I have seen the exhibit, naturally I have a bit more to say.  But I’ll start by pasting my original riposte to Cotter:

I sympathize with the author’s desire to view the Picassos in chronological order.   But that was not Picasso’s way.  In his first museum retrospective in Basel in1932, he hung the exhibit himself and juxtaposed works of dissimilar periods and styles.  Ms. Baldassari [the since fired curator], undoubtedly aware of this exhibit and in service of her exhibit’s theme, chose to do the same.

Picasso was not one to make our viewing simple.  His art is chockfull of puzzles, allusions, and visual puns.  He would be pleased, if the author’s description is accurate, that the visitors must wander about a seemingly disorganized exhibit, dead ends and all.  I have always found that the museum’s choppy viewing spaces, amid its period architecture, enhance the intimacy and charm of the experience.

Rather than praise even a single Picasso, the author’s principal impression of the exhibit is that Picasso “could be a truly terrible artist.”  Perhaps such irreverence is to be expected from someone who does not appreciate Picasso, much less his preeminence in the pantheon of art.  A book-length equivalent of such a lack of understanding is Arianna Huffington’s screed.  I am certainly not one for censorship, but the author makes the case that sacrilege should perhaps be judiciously edited from the usually responsible pages of the storied NY Times.  Personally, I can hardly wait to arrive in Paris and bask in the glory of so many masterpieces, in whatever order. 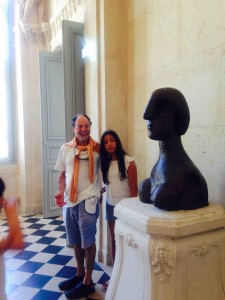 Now, dear reader, fast forward a few months, to the day when my family stormed the museum, and then hold up for a moment so I can gush.  Actually, there’s no need to belabor the point—simply put, there are twice as many Picassos on view than before.  Need anything more be said?  Four hundred works of art, a far larger permanent exhibit of Picassos than has ever existed.   There were so many great Picassos on view, so many of them your faves and mine, that by the end, even my ability to take in yet another Picasso was starting to reach capacity.  (But please don’t repeat this last to anyone—I have a reputation to uphold!)

As is well known, a successful museum’s bottleneck is not funding, it’s space.

The Musée Picasso has about 5000 Picassos, last I read.  As far as I’m concerned, the only significant gauge of the success of the renovation is that many more of them are now on view.  Any other criteria pale by comparison.  So someone made the executive decision of reframing the paintings in a contemporary way (basically centering the raw canvas within a shallow white box).  The effect was clean and simple and unobtrusive, better than a distracting frame of an ill-framed painting.  I would have preferred leaving the old antique gilt frames intact, but whatever.  Framing actually matters a lot to me, but really, fine art is not about the packaging. 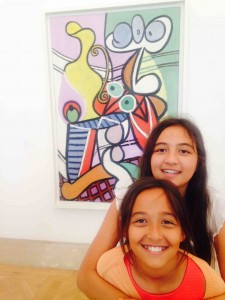 As for the order of the artworks, or the lack of it, it could have been totally random, as far as I was concerned—I was so rapt up in devouring each individual piece that the order they appeared hardly mattered.  Though whenever I actually noticed the groupings themselves, they seemed well-conceived.  I can certainly understand that a Picasso novice might well prefer a chronological display in order to make sense of this 8-decade career.  But Picasso hadn’t intended his art to be easy—he liked making his viewers work.  He might have come up with a different arrangement if he were once again the guest curator, but I should think he would have graciously approved of Anne Baldassari’s exhibit.  On the other hand, I don’t suppose he would have liked the new frames.  Though who knows?  That quintessentially modern artist might well have kept up with the times better than I….